Why is Haiti So Poor?

SUMMARY AND SOME HOPE

This paper has tried to explain Haiti's terrible situation. Haiti is the poorest country in the Western Hemisphere because of her history, her present social structures which grew out of her history and because she is caught in the impossible competition of modern economics.

Haiti needs the help of goodwilled people everywhere. She needs you. The HAITI PROJECT can provide the avenue for you to make worthwhile contribution to the work of your choice. We offer you options for donating money, goods, or work.

( PEOPLE TO PEOPLE --The parent organization for THE HAITI PROJECT--is a 501 C 3 charitable organization and all donations are tax deductible.)

The big puzzle remains: Why Haiti, not Barbados or Jamaica or the Dominican Republic? The Dominican Republic is a natural comparison, being on the same island and sharing, like Barbados and Jamaica, its history of slavery (even if its intensity was less than that Haiti). But the most puzzling aspect of the whole thing is shown in the next figure. 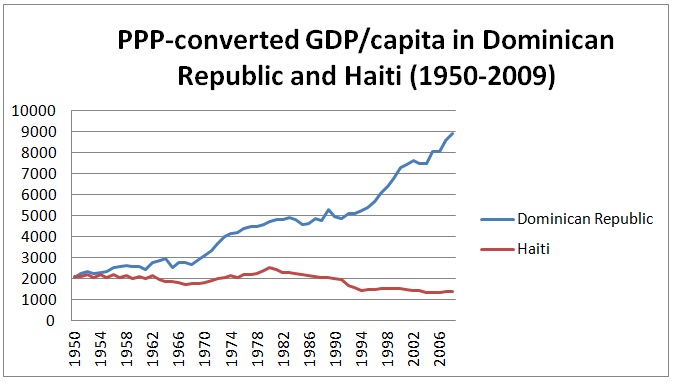 At the end of World War II, Haiti and the Dominican Republic had essentially identical levels of income per capita. Thereafter, they diverged. Situations like this are common in world history. In 1800 the US was not much richer than Latin America in terms of measured incomes, but its underlying institutions were different and so was its potential. This only started to matter when the British Industrial Revolution completely changed what was economically possible. The US could and did take advantage, Latin America did not.

One hypothesis about the divergence between Haiti and the Dominican Republic is that a similar situation arose with Haiti and the Dominican Republic. Though the latter shared a history of slavery, dictatorship and US invasion, it did not suffer as much as Haiti. After 1930 Rafael Trujillo, head of the US created national guard, set himself up as dictator. He controlled the army and embarked on a path of extractive economic growth. As the world economy boomed after 1945, divergence set in. The Dominican Republic exported sugarcane and cigars; afterwards they developed a successful export processing zone. After Trujillo was assassinated in 1961, they managed an imperfect transition to more inclusive political institutions, sustaining the economic growth. Haiti was different, without such a strong state or political control of the army, the period after 1930 saw political instability not extractive growth and when FranÃ§ois Duvalier (âPapa Docâ) came to power in 1957 he privatized violence using the ton ton macoutes to control the country, not the army. There was no extractive growth in Haiti, just anarchy.

All the same, this is just one hypothesis that fits the facts, the divergence between the two halves of the island of Hispaniola remains a major puzzle.

Daron Acemoglu is the Killian Professor of Economics at MIT. In 2005 he received the John Bates Clark Medal awarded to economists under forty judged to have made the most significant contribution to economic thought and knowledge.
James A. Robinson, a political scientist and an economist, is the David Florence Professor of Government at Harvard University. A world-renowned expert on Latin America and Africa, he is currently conducting research in the Democratic Republic of the Congo, Sierra Leone, Haiti and in Colombia where he has taught for many years during the summer at the University of the Andes in BogotÃ¡.